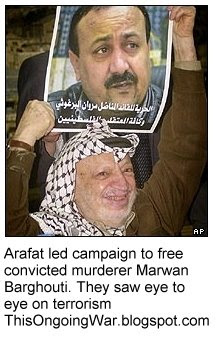 An opinion piece written by one of this blog's two authors is published today on the FrontPageMag website. The full text of Frimet Roth's article is reproduced below.


Stop Playing with Puppets
By Frimet Roth
The Palestinian Authority makes a special award for valor to the murderer of my daughter | FrontPageMagazine.com | Wednesday, April 23, 2008

We are all familiar with PA President Mahmoud Abbas' game. There was no need for more evidence that he is far from the "moderate" that the West has dubbed him. Arafat's loyal apprentice would be a more apt epithet though Abbas has even surpassed his mentor: Arafat never garnered the unflinching support and admiration of the West that his successor has.

Nevertheless, Abbas has provided yet more incontrovertible proof that President Bush, Secretary of State Condoleezza Rice and our own Prime Minister Ehud Olmert are hawking a fantasy.

One of them, Ahlam Tamimi, murdered fifteen men, women and children in the terror attack on Jerusalem's Sbarro restaurant in August, 2001. Among the victims was my own fifteen year old daughter, Malki.

True to form, Abbas felt which way the western winds were blowing and realized he'd better do a hasty 180. The following day, he canceled the awards.

As always he has managed to convey one message to the Arab world – that terrorist are heroes – and precisely the opposite to the West – that he will not actually confer any honors on them. Once again, his reputation escaped unscathed.

My wrath is not directed at Abbas, of whom I had no other expectations, but at all the Western leaders who by now should know better. Breathless from their propping, buttressing, bolstering and even kissing and hugging of that duplicitous Palestinian, they seem blind to his brazen support of terrorism.

Western leaders will no doubt praise Abbas for canceling the awards and ignore the message conveyed in the original announcement.

Unable to withstand foreign pressure, Israel's own leaders have been touting the "moderate Abbas" fantasy with equal zeal.

Speaking at the Doha Forum in Qatar last week, Foreign Minister, Livni said that Israel is negotiating "with the pragmatic Palestinians, who recognize Israel's right to exist, who seek to realize their national rights but choose the path of peace over terrorism. With such partners, who support the two-state solution, peace can be attained."

There seem to be no limits to the risks Israel will take to pump life into this farce. One of the many is releasing convicted terrorists, the most famous being Marwan Barghouti. He too has been billed a "moderate" and essential figure, despite damning evidence to the contrary.

We have watched a steady succession of of Israeli politicians jump on the "Free Barghouti" bandwagon. Yossi Beilin, who hitched up the wagon was the first. Then over a year ago Minister Meir Shitreet suggested that Barghouti will likely be released as part of future peace negotiations. Not to be outdone, Israeli Deputy Prime Minister Shimon Peres declared in June, 2007, that he would sign a presidential pardon for Marwan Barghouti if elected to the Israeli presidency. More recently Infrastructure Minister Benjamin Ben Eliezer declared that if Israel was interested in achieving peace it had to recognize that "only the release of Barghouti could change things around." And last week Amir Peretz magnanimously promised to visit all of Barghouti's victims' families after Passover to enlist their support for his personal "free Barghouti campaign".

What do we know about Barghouti? Start with the fact that he was convicted by an Israeli court in May 2004 on five counts of murder, one of attempted murder, conspiracy to murder and activity and member ship in a terrorist organization.

But for a more intimate glimpse of the man, Yossi Beilin is, surprisingly, an objective source. Shortly after Barghouti was sentenced to five life sentences, plus 40 years, Beilin had this to say to NY Times reporter, Steven Erlanger:


"Barghouti told me that he wanted to continue the use of violence...he thought he could control the violence he unleashed and end the intifada in a few weeks.." In 2005, Beilin wrote: "The evidence that he was responsible for directing terrorist acts was overwhelming and his punishment was determined accordingly."

Notwithstanding this bleak report card, Beilin does not stop hankering for Barghouti's release stating in 2007:


"In spite of the fact that Barghouti was responsible for the Second Intifada... we are nonetheless talking about the most important elected parliamentarian and the most pragmatic and influential on the Palestinian street. His arrest was a big mistake and an act of stupidity. .. not releasing him would be an even larger mistake."

This week we learned the results of a poll conducted by the Palestinian organization, the Jerusalem Media and Communications Center. 1,190 West Bank and Gazan Palestinians were surveyed by the center between April 8-13, 2008. The results prove that even the Palestinian on the street doesn't buy Beilin's hype about Barghouti's indispensability. His popularity fell from 14.3% in November, 2007 to 12.8%. During that same period, Abbas' ratings dropped from 18.3% to 11.7%.

It is not likely that the above statistics will alter the course of events in this region. These moderate marionette puppets serve many political careers too well. The beaten and battered Bush and Olmert have undeniably won a transfusion of support on the back of the Annapolis negotiations. But they are traveling a dangerous path offering only short term rewards.

Terror groups in Hamas-ruled Gaza are stronger and better equipped than ever. And Israel's Defense Minister Ehud Barak cautioned just three weeks ago: "We need to keep in mind the possibility that after all we have done, Hamas will take over the West Bank, not only by force but even in the upcoming general elections".

But apparently everybody was too busy planning the next Olmert-Abbas tete-a-tete to listen. Above all else, the puppet show must go on.

Frimet Roth, a freelance writer, lives in Jerusalem. She and her husband founded the Malki Foundation in their daughter's memory. Malki Roth was murdered at the age of fifteen in the Sbarro Jerusalem restaurant massacre in 2001. The foundation in her name provides concrete support for Israeli families of all faiths who care at home for a special-needs child.

http://www.israelhayom.com/site/newsletter_opinion.php?id=891
Free a mass-murderer for peace?