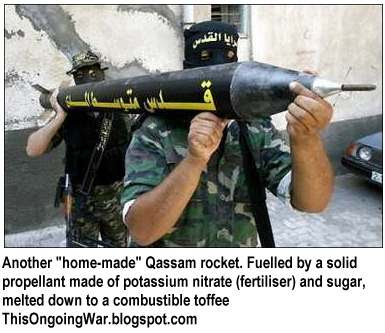 Two more Palestinian-Arab rockets were fired into Israel from Gaza, hitting a building near Kibbutz Nahal Oz in the south last night (Wednesday). Fortunately, no reports of injuries. A third rocket landed inside Gaza.

A Knesset committee was told yesterday that 1,150 Palestinian-Arab rockets landed in Sderot and the Israeli communities bordering on Gaza during 2007, compared with 1,488 in the previous year. In other words, a small decline. More than 400 such rockets have already been fired into the same area during these first seven weeks of 2008.

Chemi Shalev, writing in FORWARD under the headline "Israel Stuck Between a Rocket and a Hard Place: Invasion of Gaza Seen as Unwanted But Inevitable", observes:

The only thing separating Israel from an invasion of Gaza — a full-scale assault that its political leadership does not want to launch and its military commanders are reluctant to wage — is the notorious inaccuracy of the makeshift Qassam rocket. “If a Qassam falls on a kindergarten, a school or even a family’s home in Sderot and people are killed — the army will be sent en masse into Gaza, no matter what,” one well-placed official admitted. And the fact that this hasn’t happened yet — given the fact that 400 rockets have been launched by Palestinian terrorists this year alone — can only be described as a miracle, the official added... The very thought of door-to-door combat in the densely-populated and by now largely booby-trapped corridors of Gaza towns and refugee camps is cause enough for sleepless nights for Israeli commanders. And even after Gaza is reconquered — as it surely will be, in the final analysis — there is no doubt that the longer the army stays there, the more it will become a target of attacks by Palestinian terrorists."