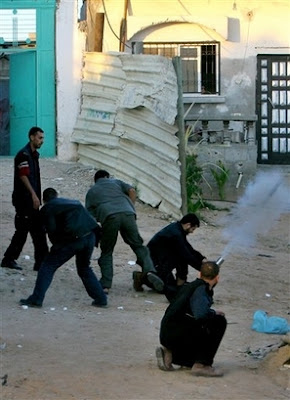 Three mortars were fired by Palestinian Arab forces in Gaza this morning into Israel's western Negev area. There were no injuries or damage, fortunately. But that was not the intention of those doing the firing.

Mortars -- small, deadly and relatively easy to fire -- are one of the weapons systems of choice for terrorists.

Israeli forces carrying out security sweeps in Nablus, a town controlled by the Palestinian National Authority, arrested two wanted Pal-Arab terror suspects last night. The two were on a "wanted for questioning" list in relation to acts of terror against Israeli civilians, and on inspection were found to be in possession of a quantity of mortars and large amounts of ammunition.

Only the Israeli news media reported on these happenings. Numerous papers around the world yesterday and today reported on Israel carrying out raids in places like Nablus in the past few days, complete with photos. But devoid of context, these reports do little more than perpetuate the dishonest picture of Israelis having nothing better to do than oppress their neighbours.
Context is everything. The reports of mortars and arms caches often go hand-in-hand with assertions that the Pal-Arabs are desperate people. That nothing is more important for them than shaking off Israeli domination, occupation and colonialization. The price hardly matters because, being desperate, there are no reasonable options for such people.

For those whose view of the Israel/Arab conflict follows this grossly-simplified and entirely dishonest narrative, we have some questions:

What if you came across a Pal-Arab who said "If there was a referendum here, no one would vote to join the Palestinian Authority"? How would you respond? And if the man were the mayor of an Arab community...?

How would you characterize the 'desperation' of a Palestinian-Arab who said to a journalist that he'd be happy to one day live in a properly independent Palestinian state, but not one that looks anything like the corruption-racked and violence-prone areas that are split between the warring Hamas and Fatah factions.

What if he added this?: "I don't believe in these factions [the competing Fatah and Hamas terror groups]. I only believe in putting bread on the table for my children. I fight only for them. At least in Israel, there's law."

What if a Pal-Arab local politician told you that in the past five years, 5,000 Pal-Arabs had moved into the Israeli-controlled part of East Jerusalem from other parts of the West Bank?

And that one of the major causes of this was a fear that they would lose their Israeli identification cards if they didn't move?

And how would you interpret an Arab leader predicting that there will be a mass exodus into other parts of Israel if Pal-Arabs get the feeling they are about to be cut loose by Israel? Tens of thousands of them, maybe hundreds of thousands, begging to be brought under Israeli rule?

These views and others like them can be found widely if you seek them out. Start with the article entitled "In East Jerusalem, residents say they would fight a handover to Abbas regime".

We're not advocating for or against the viewpoints above. Simply making the point that all the talk of desperation, so beloved by Palestinian apologists and the soft-minded reporters who uncritically parrot their propaganda, is meaningless when you pay close attention to what's actually going on in the Palestinian Arab world. Above all, we and they need to stop the terrorists. Then we can start figuring out future scenarios - not before.

The two terror operatives are Baher Saliman Abdallah Huash, 28, member of Hamas, and Abdallah Saliman Abdallah Huash, 35, member of Tanzim. Baher Huash was involved in planning the aforementioned suicide attack. Two hidden weaponry caches were uncovered in a civilian residence during IDF searches, and contained a mortar shell and two M-16 rifles. The weaponry was detonated in a controlled manner by sappers.

During the operation, a force identified a Palestinian child as he was planting a suspicious object on the ground. The child then ran away from the scene. The force fired at the object, which was found to be an explosive device when it exploded."

The IDF arrested 14 wanted Palestinians across the West Bank Wednesday night and seized large quantities of weaponry. During an operation in the village of Kabatiya near Jenin, fire was opened at the troops, but no injuries or damage were reported. (Ynet)