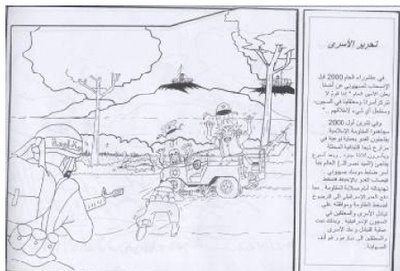 In his excellent "Letter from Israel" blog, David Frankfurter points out the unwanted consequences of uncritical, unaudited and uncontrolled European material aid to the Palestinian Arabs. David writes today that:

Materials captured by the IDF in Lebanon reveal that the Palestinians have finally found a successful export product. Indeed, one created by a home grown industry nurtured and encouraged by European taxpayer funded aid monies. Hezbollah has learned from the Palestinians the value of hate material aimed at children. It uses colouring and picture/story books to instill the virtue of killing Jews and joining the "resistance" at an early age. Here (at right) is an example. A few crayons will add colour to Hezbollah soldiers crossing the border, abducting Israeli soldiers. The Funding for Peace Coalition and Palestinian Media Watch have long documented the way internationally funded budgets of official Palestinian Authority institutions were used to ensure that education to terror starts early. The headline in this morning's Israeli Yediot Aharonot newspaper announces the reward the Palestinians are receiving for this knowledge and skills transfer: "Hizbollah is preparing Hamas for a battle with Israel in Gaza."

What Palestinian Arab society has done, with eyes wide open over a period of generations, to its own children is both a crime and its own punishment - a crime and a punishment of historical proportions.

As parents of a child actually, physically (not nearly, not virtually) murdered by the pathological savages created by that enterprise, we feel the need to endlessly remind people of the powerful truth contained in the words of a wise old woman. Golda Meir famously said: "We'll have peace with the Arabs when they learn to love their own children more than they hate us."

It hasn't happened. And as important resources like Teach Kids Peace show, it does not look like happening anytime soon.