Here's an observation the mainstream media probably won't share with their consumers about the very long royal visit to the US currently being undertaken by Jordan's king, queen and crown prince. [For some of the background, "21-Jul-21: In welcoming Jordan's king to Washington, we wanted him to be reminded of the ongoing Tamimi extradition scandal"]

His Majesty King Abdullah II spent some of yesterday in the company of senior figures in the State Department including the Secretary of State and, since we see him in the photos, the current US ambassador to Jordan, Henry Wooster. It was a working visit, with an official agenda and many participants.

What did they discuss?

Oddly, at a time when almost everything leaks and gets discussed in the world's public forums - which means on the Internet - it's hard to say.

Our principal focus, as everyone coming to this blog knows, is with Jordan's harboring of the bomber who blew up the Sbarro pizzeria in Jerusalem twenty years ago. Jordan has a treaty with the US, and the US has issued criminal proceedings against the bomber who has repeatedly confessed in public that she did it. Fifteen innocents were murdered in the explosion, two of them US nationals, and one of those was our daughter Malki.

Since the day those US charges against Ahlam Ahmad Al-Tamimi were announced in March 2017 right up until today, there has been a deliberate fog of ambiguity and opacity over US efforts to get Jordan to hand her over for trial as required by the 1995 Extradition Treaty.

The result has been that the boastful killer's spectacular career and freedom have continued practically without pause. She's free today, not living in hiding, not silenced by Jordan's notoriously manipulative government and not on the margins of Jordanian society.

At the end of yesterday's well-publicized meeting between the Jordanian delegation and the State Department people, there was a press briefing, presided over by State's spokesperson, Ned Price.
As important as the Tamimi case is, and as much as we have tried to create media and pubic awareness of the open deception by two governments over what is and is not being done to bring Tamimi to her long overdue appointment with a federal court, here is the only official public comment made by the American side. It comes from the official transcript of the State Department Press Briefing (July 20, 2021)

QUESTION: Can I ask you very quickly about Jordan, the meeting with the king this morning and the Secretary? I just want to know if the Tamimi extradition issue came up. As you’re aware, last year the then-ambassador nominee but now the ambassador told the Senate Foreign Relations Committee that withholding aid or aid could be used as leverage to secure her extradition to the States to face murder charges.

MR PRICE: Well, I expect we’ll have a readout of the Secretary’s meeting with His Majesty the King later today. When it comes to Ms. al-Tamimi, she is on the FBI’s most wanted list for her role in the 2001 Hamas attack in Jerusalem. We continue to seek her extradition. We’ll continue to work to ensure that she faces justice.

QUESTION: Yeah. Well, did it come up?

MR PRICE: I’m not in a position to speak to the meeting, but we’ll have a readout —

QUESTION: Well, are you – I mean, are you – has this administration yet raised it with – raised the matter with Jordanian authorities, the King or not? Or is this something that would have just come up for the first time today?

MR PRICE: This issue has been raised with our Jordanian partners.

Imagine getting answers like this from your doctor, your lawyer, your spouse, your child, your work colleague. We all have some sense of when we're being treated like idiots. This was one of those moments for us.
The people at Fox News where we were interviewed for two different programs earlier this week turned to State for some comment, too. This is what they got. 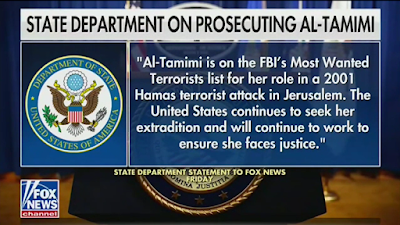 A State Department spokesperson told Fox News Friday the department won't preview any diplomatic discussions with the Jordan delegation and won't discuss private correspondence with the Roths. But the State Department said it's committed to bringing Al-Tamimi to the United States for prosecution.

"Al-Tamimi is on the FBI’s Most Wanted Terrorists list for her role in a 2001 Hamas terrorist attack in Jerusalem," the State Department told Fox News. "The United States continues to seek her extradition and will continue to work to ensure she faces justice."

You could understand that the day to day of government decision making is not something that gets discussed very much out on the open. And nor should it.

But the Jordan/Tamimi/extradition case is different. Tamimi was charged on March 14, 2017. Those charges were signed off by a federal judge nearly four years before that, in the summer of 2013, eight full years ago.

Jordan's highest court, the Court of Cassation, ruled six days later that - whether she's guilty or not guilty as charged - Jordan will not hand her over to the justice system of the United States as the treaty requires because the treaty is not valid.

The treaty is valid. What's not valid is the claim by Jordan that there is a legal impediment, just one, a very technical one easily fixed. The US says, though in the quietest of voices, that the treaty is valid. Has the US ever raised its voice? Has it threatened? Has it done anything at all to fix this standoff with a kingdom whose existence is underwritten by massive US financial aid and by American military resources?

No one on the US side, not under Obama, not under Trump and till now at least not under Biden, is willing to speak clearly on this. The Jordanians have avoided all comment to people outside their kingdom though Jordanian domestic audiences have been told in Arabic ["13-Nov-19: Thank you, Mr Foreign Minister"] by their deputy prime minister and (his other role) foreign minister that Jordan does not have to hand the bomber over to the Americans. Jordan respects and abides by the law, Mr Ayman H. Safadi said, and the law does not allow it.

He is in the photo above and is in Washington with his king today. How valuable it would be if some enterprising speaking-truth-to-power reporter grabbed the opportunity to ask him to state Jordan's Tamimi policy to an American audience.

Being given the silent treatment isn't a new experience for us in this long pursuit of justice after the murder of our beloved Malki. But our message now to anyone who cares to listen is that it doesn't serve any good purpose and it needs to be stopped. American vagueness on the matter of getting justice done and bringing a committed terrorist to trial for the killing-by-terror of US nationals has serious consequences.

We have almost no power in standing up to the cruel suppression of our voices by elected and unelected public officials. The only power we do have is to move public opinion and as much as we can, and with the help of others, we will.

Because what's being done by government figures in this scandal is an ongoing disgrace.