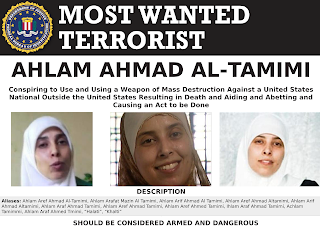 The news industry doesn't give us an easy time.

The only way our child's murderer, Ahlam Tamimi, the Jordanian woman who openly confesses to - boasts of is the more appropriate term -  bombing the Sbarro pizzeria in Jerusalem to kill and maim the Jewish children inside, will face justice is if public opinion is aroused enough to push the US government to firmly insist that Jordan complies.

It's incomprehensible to us that a succession of key US officials has stayed passive and acquiescent in the fact of Jordan's recalcitrance.

So long as the entire scandal remains suppressed, as it assuredly is, this isn't going to change.

Arnold Roth is an invited speaker on three public platforms today. Each is timed to coincide with Israel's Yom Hazikaron, the annual Memorial Day for the Fallen Soldiers of the Wars of Israel and Victims of Acts of Terrorism. It comes later this week, on Wednesday. It's immediately followed by Israel's Independence Day on Wednesday night and Thursday.

We hope you will find the time to join us at one of today's lectures/interviews. 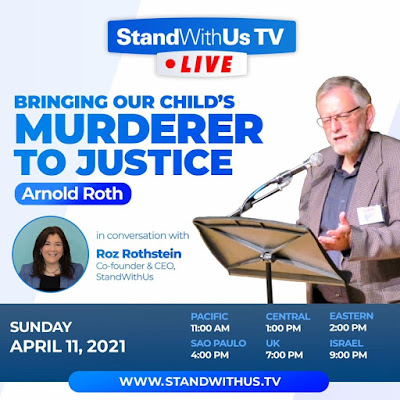 Bringing Our Child's Murderer To Justice | In 2001, Malki Roth was murdered in the Sbarro restaurant suicide bombing in Jerusalem along with 15 other people. Ahlam Tamimi, who now lives in Jordan, has shown no remorse for her despicable crimes. On this week’s episode of StandWithUs TV Live, Malki’s father, Arnold Roth will join us in conversation with Roz Rothstein, StandWithUs Co-founder and CEO, about terrorism, the impact Malki’s tragic death had on his family and the battle to have Tamimi extradited to the US to face charges. Join us live on Facebook. 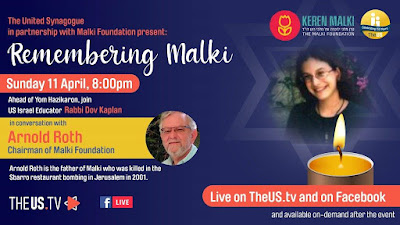 Remembering Malki | Ahead of Yom Hazikaron, join Rabbi Dov Kaplan in conversation with Arnold Roth, Chairman of Malki Foundation and father of Malki who was killed in the Sbarro restaurant bombing in Jerusalem in 2001. In partnership with the Malki Foundation, www.kerenmalki.org

View the event at https://theus.tv/remembering-malki and available on demand afterwards

The United Synagogue "is the largest synagogue movement in Europe. Founded in 1870, today it comprises 62 local communities supported by a central office. The Chief Rabbi of the United Hebrew Congregations of Great Britain and the Commonwealth, Chief Rabbi Mirvis, is the spiritual head of our communities." UPDATE April 13, 2021: The video of the Beth Jacob Atlanta presentation is now up and viewable here.