23-May-17: Condemning terror is so easy to do, even Jordan can do it - and no news reports will criticize them

We were pretty sure this was going to happen, and it has.

The Jordanian government of King Abdullah II has just issued a condemnation of last night's Manchester Arena massacre, a terror attack that has strong similarities to the one engineered at Jerusalem's Sbarro pizzeria in 2001 by a Jordanian woman, Ahlam Tamimi.

Tamimi, who has proudly confessed her role as mastermind of the massacre that took the life of our daughter and 14 other people (mostly children), currently lives in total freedom in Jordan's capital, Amman, despite an Interpol arrest warrant and a United States extradition request that calls on Jordan to send her to the US to face charges.

The Jordanians have treated her as a national treasure since she arrived back there (the country where she was born and lived until shortly before she masterminded the Jerusalem atrocity) in October 2011. Did you ever see that statement in a mainstream news report? It's certainly true.

If the Jordanians, from the king on down, have any sense of irony or of the deep hypocrisy that stains their denunciation of the Manchester savagery, there's no sign of it in the announcement. And if any news analysts have torn into them, we haven't seen it:


Jordan condemns terror blast in Manchester | MENAFN - Emirates News Agency (WAM) |  AMMAN, 23rd May, 2017 (WAM) -- The Jordanian government today denounced the terror attack that took place at the Manchester Arena last night, killing 22 people and injuring more than 50. According to the Petra News Agency, the Jordanian Minister of State for #Media Affairs and Communications, Mohammad Momani, said that this "heinous and inhumane act represents the real face of terrorism and extremism, which is implemented by coward terrorists aim to destabilise nations and intimidate innocent civilians". Mr. Momani, who is also the government's spokesperson, reaffirmed Jordan's firm and constant stance in fighting terrorism, extremism and violence in all shapes and forms, stressing the need for concerted efforts to counter terrorism in a holistic approach wherever it rears its head. He also extended his condolences to the British government and to the families of the victims, wishing the injured a speedy recovery.

The real face of terrorism and extremism? We think Tamimi fits that bill exceedingly well. 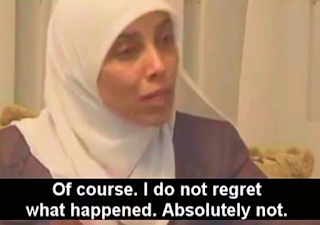