28-Mar-16: Is it time yet for UK's foreign aid office to come clean on their part in funding Palestinian Arab terror? 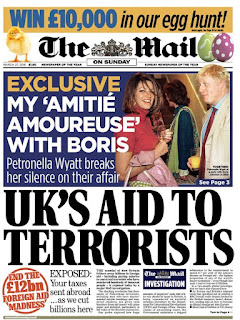 A couple of years back, we wrote ["9-Sep-13: Snouts and troughs"] that there has been an active EU cover-up since 2003 to conceal the hideous things done with European foreign aid funds delivered to the Arafat- and Abbas-controlled PLO/PA regimes in Ramallah.

During the years since then, torrents of European funding, billions of Euros, were channeled to the terrorism-addicted Palestinian Authority. Throughout that time, the Eurocrats managed to avoid carrying out even a single financial audit until the one whose results were published in December 2013 [full text here].

The astounding policy of hands-off "see no evil", mismanagement happened while the EU "provides 20% of the direct financial support for the PA", making it "the biggest multilateral donor to the Occupied Palestinian Territories".

So what did that audit find?
But there's more.

In the wake of the audit, the chairman of the European Parliament's Committee on Budgetary Control - a man who, given his official role, probably thinks about things like financial controls and honesty and checks and balances more than most of us and certainly has more information than we do - wrote that the EU's auditors found "major dysfunctions" in the way the Palestinian Authority were getting and spending their foreign aid Euros.

In that important, but little noticed, article in the Wall Street Journal, he urged the EC to impose benchmarks and conditions on the Palestinian Authority as a condition for getting more EU gift money:

These should include improving the state of human rights in the West Bank, cracking down on corruption and cutting off subsidies to convicted Palestinian terrorists. In these hard times, Brussels shouldn't tolerate blatant misuse of EU taxpayers' money. [WSJ, April 9, 2014]

We will also mention that a Times of London journalist who saw the pre-publication version of the audit report wrote in an October 2013 article ["£1.95bn EU aid lost in Palestine", Sunday Times, October 13, 2013] that went further. Having seen the pre-publication version of the report, he concluded that "Billions of euros in European aid to the Palestinians may have been misspent, squandered or lost to corruption, according to a damning report by the European Court of Auditors..." Our uncorroborated sense is that the report went through a sanitization process after his article appeared and before the public saw it.

Can anyone hear even a faint echo of any of this in today's defensive arguments put up by the UKaid/DfID people in the wake of the Mail on Sunday revelations this past weekend? [Refer to "27-Mar-16: The PA's "Rewards for Terror" scheme and the lies that keep the pounds flowing in" and "27-Mar-16: In UK, facing up to UKaid's scandalous ongoing financing of Palestinian Arab jihad".]

Whatever the 2013 EU audit report says (and it strikingly side-steps any attempt to tackle the profoundly embarrassing matter of PA financial rewards for convicted terrorists), and taking into account what the UKaid people are now saying, two major points at least should be clear:
The mandarins of Whitehall will get away with murder again (we're not being metaphorical) only if we - which really means British taxpayers and the British media - let them. Perhaps now is the time to stop the lethal foolishness.

We noted a while back ["13-Oct-13: Massive scandal in Palestinian Arab financial affairs? No!"] that there was one aspect of the European/UK saga of PA-centred corruption and dishonesty that was truly beyond our comprehension. It still is, and it's this: how can the members of the news media who cover the EU and the Middle East conflict have allowed this decade-plus financial scandal (one that everyone knows about and that few will discuss in public) to get so little media coverage? How much of the conspiracy of silence is based on intimidation?

Perhaps we're finally going to find. Or perhaps not.

Few effective ethical systems remaining...belief must be suspended altogether when reading about some of the things which occur in the Arab world...that so called Palestinian officialdom actively supports hatred through education to their childre...hero worship of killers who slaughter innocents ...and financial rewards to heinous criminality...and using financial assistance from gullible Western democracies...all this should be more public...S H Cohen

Tragically, I can't be optimistic about a "happy ending" to this nauseating farce and outrage. We are educated not to hate, but I find it extremely difficult to avoid hating Europeans.