16-Jun-13: At The Telegraph (UK), they know about pictures being worth 1,000 words. They just fail to understand what their eyes are seeing

Memo to the editors of The Telegraph (UK):

You published the photo below as part of a collection of images entitled "Palestine's young jihadi summer camp" this past Thursday. (It's still online.) But there's something odd about it that is immediately noticeable to those of us who follow the perverted manipulation of young Palestinian Arabs that is a constant in the life of the Gaza Strip and its terrorist overlords.

The caption you wrote for this photo is


The rescue mission of fallen comrade is staged
Picture: AFP

You can see those words in the closeup we screen-captured just now: 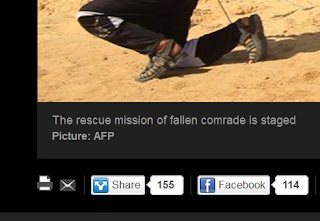 Perhaps your captions editor was having a wishful thinking day. Or maybe the people who match images to Middle East Conflict stories at your news site are just clueless. If so, they're in good company.

What the picture above, along with the other photos appearing with it in a photo essay credited to a Gaza-based freelance photographer called Abdel Rahim Khatib, actually depicts is a full-blown summer military camp for little children and teenagers run by the radical terrorist organization Palestinian Islamic Jihad. It prepares them for killing, kidnapping and other Islamist values.

Mr Khatib's own caption for the series, which you can see on the Demotix site, is this:


Thousands of youngsters between the ages of six and 16, can participate in a summer camp where they receive military as well as religious training. Islamic Jihad run the paramilitary summer camps for 10,000 children. [Demotix.com]

Being a resident of the Gaza Strip, and subject to the political and religious orthodoxy of the Hamas regime, Mr Khatib may be (perhaps understandably) reluctant to say more about this picture than is absolutely necessary. But your competition over at the Daily Mail (UK) don't have that problem. You might want to go have a look. In the words that accompanied their version of the same photo essay, they write:


Summer camp... Palestinian-style: Chilling images show children as young as six firing guns and staging mock kidnapping of Israeli soldier | Up to 10,000 boys at a time visit camp in the Gaza Strip | Explosions and burning tyres used to make mock warzone realistic | Believed purpose is to radicalise the terrorists of tomorrow
By EMILY DAVIES 12 June 2013
...Visitors to the camp, called Generation of Faith, are given AK47s that are bigger than some of the children holding them... It is believed that the camp’s purpose is to radicalise the next generation from a young age... The kidnapping ‘game’ witnessed yesterday, which drew comparisons to the capture of soldier Gilad Shalit in 2006, involved a young boy being dragged by two gun-toting teenagers from an area marked with an Israeli flag. [Daily Mail]

The people at Huffington Post UK also got the basic facts more right than your people did. So too did Ynet and Al Ahram. NBC News mistakenly thought the camp was run by Hamas but got most of the main points right.

The photo above has nothing to do with a rescue mission or a fallen comrade. That's pure fantasy by your people. It's in fact an homage to the June 25, 2006 hostage-taking mission on Israel's Gaza border that resulted in several Israeli servicemen being killed on the spot and Gilad Shalit being grabbed and taken into Gaza where he was held for five and a half years.

Perhaps it's a rehearsal for a future attempt to repeat what was done to Shalit, using children and high-powered rifles.

Talk about win-win. If they inflict losses on the Israelis, it's a victory. If the children, armed with lethal weapons, are hurt or killed, it's an even larger victory given the willingness of pliable journalists to buy into the Palestinian Arab terrorist mantra of "the Israelis target our children". In reality, no one targets Palestinian Arab children more effectively, more cynically, than Hamas, PIJ, Fatah and the host of other Islamist terror and death-cult groups proliferating - flourishing - in the Palestinian Arab world.

You can get a taste of that manipulation by viewing an AFP video clip of the same camp, over at YouTube. It features the camp kommandant, who calls himself Abu Khaled, pompously - and preposterously - declaring


The camp's first purpose is to provide entertainment...

But then adding a few second later


We have planted hatred of the enemy in their hearts...

He should be believed.

By the way, in case there's anyone on the editorial team at The Telegraph who feels the tiniest bit embarrassed by this public display of unprofessionalism, we have a suggestion. Given the central and indispensable role that UNRWA and its billion-dollar budget plays in the education of the entire gamut of Gaza Strip's youth population, perhaps you would consider assigning a junior reporter plus camera-man, to look into the role UNRWA personnel, resources and money play in the annual horror of Palestinian Arabs turning Palestinian Arab children into ready-for-the-next-atrocity terrorists.

If more people were aware of this phenomenon of terrorist summer camps and how they are organized and funded, that in itself would be a major step towards understanding how and why this ongoing war goes on and on.