23-May-13: If we knew then what we discovered today about how France2's correspondent decided the IDF killed a child in Gaza 13 years ago 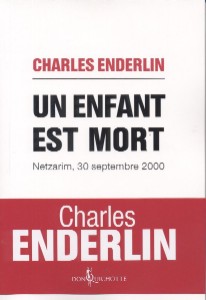 In "22-May-13: The post-Al Durah period: the challenges are starting to become sharper", we quoted Israeli journalist Ben Caspit's valuable analysis of the Al Durah Affair and of the role and responsibilities of the news-reporting media.


The truth is a vital commodity, especially where we are. If we didn’t kill Muhammad al-Durrah, then I want to know that. If he wasn’t injured in the film clip screened by France 2, then I want to know that too... I have a lot of respect for correspondent Charles Enderlin from France 2, but as someone familiar with all the details at a very high resolution, I believe that he never should have determined that the al-Durrah boy was dead, as long as he had a video clip which showed him still alive. That footage was put into deep storage. It was censored and disappeared, only to show up again this week in the report by the Israeli Commission of Inquiry. A responsible journalist never would have broadcasted the footage without also showing the doubt, the full picture, and all of the details relevant to the story. [Source]

Today, this afternoon, in going back over some of the things we know about Charles Enderlin and France2, we came across something quite extraordinary. Enderlin, France2's man in Israel, the one who personally edited the original Al Durah "killing" footage that went to air all over the world on September 30, 2000, was interviewed in Haaretz on November 1, 2007, to mark the seventh anniversary, more or less, of the events that we know as the Al Durah Affair.

It's a long interview with Haaretz reporter Adi Schwartz, and it appears in both the Hebrew and English editions. Both are still online today: the Hebrew ("בואו נראה את זה שוב") here and the English ("In the footsteps of the al-Dura controversy") here.

The reporter, after reviewing the controversy about who fired at the Al Durahs and the way in which parts of the media made up their minds, asks Enderlin:


In hindsight, is it possible that you were too hasty that evening?

Here's the Haaretz English version of the answer:


I don't think so. Besides, the moment I saw that nobody was asking me anything officially, I started feeling more strongly that the story was true.

And here is the Haaretz Hebrew version of the Enderlin response to the same question:

We'll translate the Hebrew for you.


I don’t think so. If I had not said that the boy and the father were victims of gunfire emanating from the direction of the Israeli position, in Gaza they would have said “How come Enderlin doesn’t say it was the IDF?"

Got that? It's a helpful insight into how news sometimes gets reported by certain kinds of journalists and channels.

To remind us all, Charles Enderlin was in his Jerusalem office when those events took place in Gaza on September 30, 2000. The sum total of the visual evidence he had was video material sent to him by digital transfer from a stringer in Gaza. Its source was a Palestinian Arab cameraman, Talal Abu Rahma. Did Enderlin thoroughly check it to satisfy himself that it was an authentic record of what it claimed to be - the cold-blooded and deliberate killing of a child and the wounding of the father by Israeli forces? Given what most of us know about the relative accuracy of factual reporting on the two sides of the conflict between Israelis and Palestinian Arabs, did he harbour any doubts at all? Did he seek independent verification? A second opinion? A third? Did he speak with any of the other video photographers out there at Netzarim? Or to their agencies?

The answer, which we have not seen reported anywhere else in all these years (correct us please if we're wrong on this), is this: evidently he felt he could not go off and check because (our understanding of his plain Hebrew words) what would they then say about him, Enderlin, over there in Gaza?


Pause for a moment to digest this. While you do, allow us to revisit a small segment of this morning's AP report on the widely-reported grotesque savagery in London yesterday.

Every news program on earth (virtually) showed the video image last night of a man with blood-drenched hands, holding a knife, a machete, confidently mouthing off in front of cameras about his religion, his god, what the British ought to do to their leaders. That this barbarism was an act of terror was obvious even to the BBC whose guidelines discourage the use of the T word other than when quoting others, but which found a way to call this terrorism (which it certainly is) anyway.

And yet look here at the somersaults one major global news service performed in order to be sure the material they were about to disseminate was true, accurate and unimpeachable:


The Associated Press examined the footage to verify its authenticity. The AP cross-referenced images from the scene, aerial shots, the location of a car behind the alleged attacker and appearance of a body and car in the background of the image. [Source: Associated Press,  London terror attack leaves 1 man hacked to death, two suspects hospitalized]

Those are the things you do when you're genuinely concerned about the consequences of being wrong. Enderlin, by contrast, tells us he decided to pin the blame on the IDF by considering what would be said about him in Gaza if he did not, and proceeded to transmit his exclusive coverage as widely as a person can.

Perhaps we're naive, but this seems genuinely shocking. And the admission emerges, unforced, from his own mouth.

As for Haaretz, we are left wondering who, why and by whom the decision was made to sanitize Enderlin's unprofessional admission by... simply erasing it from the global record, while leaving it intact in the Hebrew version.

By the way, just two weeks after the publication of Enderlin's interview with Haaretz (i.e. on November 14, 2007), Enderlin and France2 handed over the raw footage of the events of seven years earlier to a French court, something they were compelled to do by French court order. Prof. Richard Landes, an expert in the details of the Al Durah Affair, wrote at that time [see "Enderlin cuts the tapes that France2 presents to the court"] and has asserted for the past six years that Enderlin


presented an edited version in which he took out at least three minutes, and at least one scene that I distinctly remember seeing.  [Landes]

How would those law suits and appeals initiated by Enderlin and France2 have fared had the courts known what Enderlin himself - the prime propagator of the imagery and the analysis of the Al Durah affair - said about why he blamed the Israelis?

Lethal journalism assuredly exists. The better its workings are understood, the safer we will all be. But we are not there yet.

there is much to be genuinely shocked about in this story, and the more i contemplate it, the more outrageous Enderlin's behavior has been, especially once the worldwide impact of his footage became apparent.

part of the reason the press went over with great care this video is because it might provoke violent anger against Muslims, a matter about which the press has repeatedly expressed grave concerns.

in 2000, apparently, provoking violent anger against Israel was not a serious concern.

There's another aspect to Nahum Shahaf's analysis, one that hasn't received much attention (from http://www.israelhayom.com/site/newsletter_article.php?id=9501):

"That wasn't all," Shahaf recalls. "There's a concept known as a sun clock. Shadow projection length varies with every hour of the day. One of the things I checked, from the direction of the shadows, was when the incident occurred. I was amazed to find that according to the shadow projection, the incident took place after the boy had arrived at the hospital as a corpse. In other words, according to the direction of the shadow, the boy who was buried under the name al-Dura was buried before the incident took place, before he was supposedly 'shot to death.'"

Thank you very much for this remarquable discovery and analysis.
I must confess I only did read the english version of Haaretz but my daughter should have seen this "admission" in the hebrew text.
Toda raba ve Shabat Shalom.