3-Dec-12: [Updated] Deadly dangerous games and those who play them

We started this blog some years ago out of immense frustration.

Living here in a democratic society, humanistic values are taken for granted. Human rights can actually be obtained, if need be, by turning to the media, the law and public opinion; no small quality here in this part of the world. We saw over time and particularly after the events of 2001 how a deadly combination of media reporting (sometimes malicious, sometimes manipulated, sometimes incompetent and superficial) and political hypocrisy produced a result in which the war by the terrorists against Israelis went under-reported and was and is, tragically, little understood.

Being the parents of a child murdered in a deliberate and greatly-celebrated massacre of children in the center of the country's capital city makes us feel there's no need to dwell on the consequences of such lethal factors. To us, it's clear that people need to hear about the terrorism and the terrorists. For the most part, that does not happen.

Today there's a reminder of how this sickening duplicity/stupidity/hypocrisy works. It concerns sport.

An Associated Press report from this past Saturday says there's yet another world-wide campaign to damage Israel by appealing to uninvolved parties - in this case footballers - to boycott an international sporting competition that is set to take place here next year.


Saturday, 01 December 2012 [online here]
By THE ASSOCIATED PRESS
LONDON: Dozens of leading footballers have signed a statement protesting UEFA’s decision to stage the European under-21 championship in Israel next year following the country’s recent military offensive in the Gaza Strip. Sixty-two players, including Chelsea’s Eden Hazard, Arsenal’s Abou Diaby and Paris Saint-Germain’s Jeremy Menez, claim that Israel hosting the tournament will be “seen as a reward for actions that are contrary to sporting values.” The protest statement was promoted Friday by several pro-Palestinian groups... Headed “European footballers declare support for Palestine”, it was not signed by any players due in Israel in June.... “We, as European football players, express our solidarity with the people of Gaza who are living under siege and denied basic human dignity and freedom,” the players said in the statement, which was also published on the website of former Tottenham and Sevilla striker Frederic Kanoute... The draw for the biennial UEFA tournament was conducted on Wednesday in Tel Aviv, the coastal city that was bombarded by rocket fire from Gaza. But UEFA President Michel Platini has said he has no security concerns about the eight-team tournament, which will be played from June 5-18 in Jerusalem, Tel Aviv, Netanya and Petach Tikva... Platini wrote to the Israel Football Association in June to say that the country “earned the right to host this competition through a fair, democratic vote.”

One of the incidents in the just-concluded shooting battle between Israel's defense forces and the terrorist organization Hamas that rules the Gaza Strip with an iron fist and an unimaginably large arsenal of rockets intended for Israeli civilian targets, involves a football field.

Israeli forces attacked and bombed a Gazan soccer pitch and stadium two weeks ago. Days later, the international roof body of soccer, FIFA, said [report] it is going to take responsibility for making good the damage. A friendly-sounding FIFA secretary-general Jerome Valcke is quoted saying "Soccer brings people together and we will support any re-construction necessary when football infrastructure is destroyed through disasters".

The soccer field he mentions appears in the IDF-issued aerial photo below: 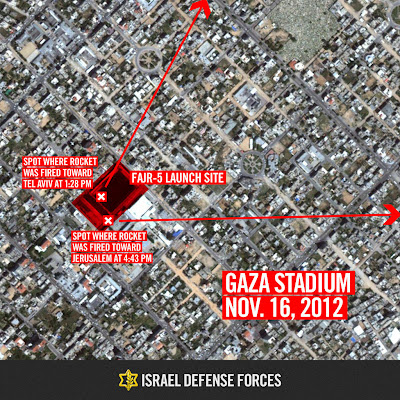 We're connected to this in a somewhat personal way.

Two Fridays ago, we lit the Sabbath candles here at home in Jerusalem, and several minutes later were forced to run, carrying our wheelchair-bound youngest daughter, down the stairs for shelter, as did hundreds of thousands of other Israelis living where we do in the capital Jerusalem. A cluster of medium-range rockets had just been fired by the terror thugs of Hamas-ruled Gaza towards our home and the incoming-missile sirens were blaring.

Now we know, though we knew almost nothing at the time except fear and anxiety, that the 'football infrastructure' to which the head of FIFA refers was the launch pad for the brazen terror attack.

That field was hit by an IDF counterattack two days later, presumably to reduce the likelihood that we would have to run for our lives again, at least from that same source. For people with their heads in the sand, we remind this this is exactly what defense forces are supposed to do. The IDF did it with precision and a well developed sense of proportionality.

You will find no mention of the abuse of sporting facilities for the purposes of trying to kill innocent civilians in the footballers' letter calling for Israel to be denied the right to host an international sporting event.

Nor will we see mention of how Israeli soccer players of Arab origin are respected members of both local and national sporting teams. Nothing especially noteworthy in this, given the inclusive nature of day to day in this country, but it's truly shocking how little this is known outside our borders. Israel's Walid Badir, a soccer champ who is an Arab Israeli, is a fine example, but just one of many. Captain of the Hapoel Tel Aviv team, he has played in scores of internationals for Israel and most famously slammed the equalizing goal in Israel's 2006 World Cup qualifying match against France. There are many others like him.

Here below are the names of the players (sorted by country) who evidently signed the letter calling for a boycott of Israel [source]. Though we realize there is more than a small degree of manipulation going on here, they deserve to be named and shamed for ignorance of the facts, for their lack of sporting goodwill, for voluntarily submitting to a campaign of political manipulation of their names and their sport, and for collaborating in a masquerade that cynically exploits the terminology of human rights while engaging in the very opposite:


It's unlikely the promoters of this nasty anti-Israel campaign will have shared the following with the footballers. So we'll mention that the Palestinian Football Federation happens to headed by an especially unlovely individual called Jibril Rajoub, reportedly one of the promoters of the players' letter. Rajoub's Wikipedia page dishes out some facts that the defenders of Palestinian Arab sport and attackers of Israel ought to take into account but almost certainly have not.

Rajoub is a convicted terrorist who spent years in prison. He was "a close lieutenant of Arafat" who "criticized the growing influence of religious fundamentalism in Palestinian society schools" during the years immediately after the 1993 Oslo accord when it was expedient for him to hold to those views. As the head of one of Arafat's largest armed militias, he "launched a major crackdown on Hamas and the Islamic Jihad Movement". His men and weaponry were used "to quash political dissent and harass political opponents of Yasser Arafat and the Palestinian National Authority, including the use of torture". Last year, he went public with a peace-loving, co-operation-seeking speech about the terrorists who kidnapped and held hostage a young Israeli serviceman: see "We salute Shalit's kidnappers, says Jibril Rajoub"], making it perfectly clear which of the two sides - the kidnappers and the victim - he backed.

It happens that we wrote about this giant of sports' highest values four months ago ["26-Jul-12: The Olympic Games start tomorrow. What have we learned?"]. Just before the London Olympics, decent people throughout the world were unsuccessfully campaigning [see "20-Jul-12: The Olympics, terror, cowardice and wisdom"] for the International Olympic Committee to remember the victims of the Munich Olympic massacre of 1972 - the one carried out by terrorists in the service of Rajoub's master and colleague. Rajoub's sporting contribution was to term the request for a minute's silence "racist".

He's a man who understands racism from the inside. Here's a video of a Rajoub speech in the Arabic language, translated to English via Palestinian Media Watch subtitles, from a July 2012 PA television show:

Unfortunately yet another obnoxious figure who embodies the 'admirable' values of Palestinian Arab sport and whose deeply offensive rantings, expressed in a language most people outside the region don't understand, go ignored and unnoticed.

The excellent researchers at CAMERA reported on Thursday that the 62 names on the letter above have now gone down to 52. If, as the CAMERA people write, "the text of the petition is inaccurate, why wouldn't many of the signatures be, too?"

The following ten "signatories" (in alphabetical order) apparently never signed, and perhaps never even saw, the petition, as their names have been removed from the list of 62 purported signatories:

We think the promoters of the shabby letter/petition/campaign managed to score an own-goal.