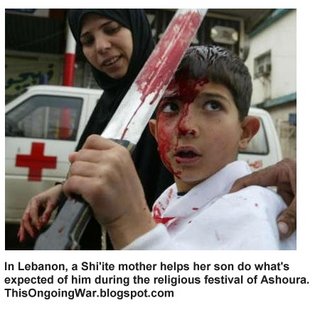 Voices that speak from within the world of extreme Islam delivering a message of hatred and triumphalism are hardly news, and if they are what you're seeking, this blog is not the place to find them. There are endless such voices and an unlimited number of forums to give them a public audience. Islamic hatred of Jews, of Christians, of non-Islam, is a plague, and not only on the web.

But when a voice is heard that speaks from deep inside that frightening, non-democratic world, and a Shi'ite Lebanese voice no less - a voice that questions some of the basics of that message of Islamic hatred and racism - it deserves some help so that it reaches a larger audience. (Thanks to Tom Gross.)

One such voice, an exceedingly rare one, is found in a scathing essay titled "To be a Shi'ite now", written by Mona Fayad, a psychology professor at a Lebanese university, in which she attacks her fellow Shi'ites for blindly following Hezbollah along a path she calls "no different from suicide." It's embarrassing (to the Lebanese) to have to point out that Dr Fayad is using suicide as something negative.

Published earlier this month in the An-Nahar daily newspaper , Fayad complains bitterly that to be a Shi'ite now "is to block your mind". It is to let Iran's supreme leader and ideologue-of-death Ayatollah Ali Khamenei "command you, drive you, decide for you what he wants from the weapons of Hezbollah, and force on you a victory that is no different from suicide."

Interviewed in the aftermath of her Arabic article by the Boston Globe, Fayad says: "People thank me, encourage me, and ask me if I am scared. But I am not scared because I live in a country where a bomb can fall on my head at any time, so I want to express my opinion... People have been lying to themselves, afraid of Hezbollah because it is loaded with weapons but it is time to stand up and ask why."

"We've been forced to shut up for decades because we are at war but we have to speak in critical periods so that the leaders know who are with them and who are not," Fayad said. "The future of Lebanon is at stake."
She's no friend of Israel, and neither is An-Nahar. But besieged (needless to say) by criticism from all parts of Shi'ite society, it's important for people outside the region to listen carefully when she says: "If I get to the point where I can't write what I believe in, life has no meaning." Google points to some other Lebanese who are bothered by these concerns.

The fundamentally anti-democratic and ideologically-extreme aspects of life in Arab societies are chronically swept under the carpet, most noticably by writers and so-called analysts from the west. Writing from robustly open, noisy Israeli society, the contrast with our side of the border could not be clearer. What's also very clear to us is that when non-Arabic-speaking mainstream media sources - the BBCs, the CNNs, the Times of London and of New York - purport to convey what Arab society thinks, they pretend that they are in a position to know. Most of the time they're not.

he doesn't look any older than six or seven! my g-d, he doesn't know what he's doing at all!

Two articles in the Lebanese daily Al-Nahar ­ one from August 10, 2006, by Naif Karim and another from August 12, 2006, by Sanaa Haj ­ accused Mona Fayyad of superficiality and of distorting the facts, and mimicked the style of her article.

Karim wrote: "The hypothetical Shi'ite is supposed to give up his weapons and sleep in the arms of the wolf, relying on the protection of the international community and not troubling himself or his country with [issues of] liberating territories... [or] liberating Lebanese prisoners... The hypothetical Shi'ite is supposed to accept it as inevitable fate that there are networks of Israeli agents who plant bombs and kill activists from Sidon to Ba'albek... A Shi'ite who counts as a pure Lebanese is one who condemns [Syrian Foreign Minister] Walid Al-Muallem and [Iranian Foreign Minister] Manuchehr Mottaki for their open interference in Lebanon's affairs, [but] throws flowers to Condoleezza Rice and approves of the New Middle East that she is weaving from the blood of our children."(3)

Sanaa Haj, a university lecturer, wrote: "To be a Shi'ite means having to justify [the activity of] the resistance [i.e. Hizbullah] ­ to foreign [parties] and unfortunately also to domestic [ones]... [It means having] to convince others every day that you are loyal to your country, which you nourish with your blood and your determined stand, and to constantly prove that you are an Arab and not an Iranian... to endure the sight of your family members in South Lebanon being killed and uprooted from their homes... to keep silent and not dare to express your enthusiasm and your joy at the victories of the resistance, so as to not offend the sensibilities of certain people in Lebanon..."(4)

In an August 12, 2006 article in Al-Nahar, Isma'il Sharaf Al-Din responded to Naif Karim's claims, saying that Karim had not answered the legitimate questions raised by Mona Fayyad. Sharaf Al-Din, who sees himself as a displaced Shi'ite, wrote that he agreed with Fayyad's statements and wished to add one of his own: "As a Shi'ite, you must first of all demand an accounting from those who started this adventure, which, as an initial result, caused more than one million Lebanese, most of them Shi'ites, to be displaced from their homes, with [entire] cities and villages being emptied of their inhabitants."(5)


Reformist columnist 'Aziz Al-Haj posted a reaction on the reformist website Elaph, stating that Mona Fayyad "is not the only one who writes with such candor out of love for Lebanon and its people." He listed many others who had written in the same vein, in the London Arabic-language daily Al-Sharq Al-Awsat and in the Kuwaiti press, and who had incurred a torrent of curses, insults, and accusations of being communists.(6)