23-Mar-17: Looking for justice in Jordan, Jerusalem and Washington 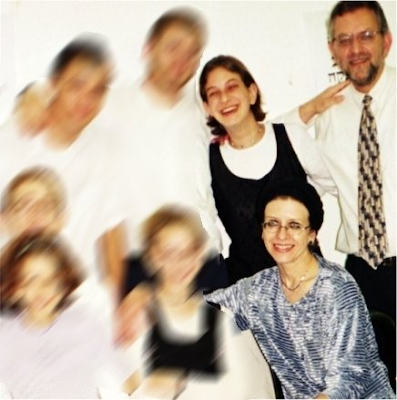 The article below originally appeared on the website of Times of Israel yesterday.

Nearly 16 years ago, Arnold Roth lost his daughter Malki in a suicide bombing at a Sbarro pizza shop in central Jerusalem. Now he’s saying he won’t give up his fight to make sure a female terrorist who helped plan and carry out the attack sees justice.

Roth’s daughter was among 15 people killed in the August 9, 2001, bombing, and one of two American fatalities. On Monday, Jordan’s top court upheld an order refusing an American extradition order for Ahlam Aref Ahmad Al-Tamimi, who was convicted over the bombing in an Israeli court but has been living free in Jordan the last several years.

Roth is vowing to continue to push for Tamimi to be shipped off to the US to be punished over the bombing, which also injured 122 people, including several Americans, when it ripped through the shop in the midst of the Second Intifada.

According to the US Justice Department, which recently unsealed the extradition order, Tamimi helped plan the bombing, including choosing the location for maximum casualties, and brought the suicide bomber to the restaurant.

Roth expressed great doubt over whether the Jordanian ruling was legitimate, rather than just a political cover-up.

“I’m skeptical based on years of seeing the way formal decisions are taken and announced in the Arab world,” Roth said.

Jordan’s top court ruled Tamimi couldn’t be handed over to the US because a 1995 extradition agreement between the two countries was never ratified by the Jordanian parliament.

“Perhaps there is a constitutional prohibition against extradition. But they have had more than two decades to figure that out,” said Roth, who is a practicing lawyer.

He added, however, that “looking back at news reports of 1995, when the extradition agreement was made, no one raised the issue of any constitutional barrier.”

“I want clearer heads than mine to look at this. For instance, the American authorities in Jordan,” he said.

US authorities did not react to the Jordanian ruling, and a Justice Department official declined to comment. However Roth, who says he has begun talking to US lawmakers about continuing to push for the extradition, said he understood the Americans had been caught off guard by Amman’s refusal.

“People are outraged and a lot of them are Americans. We’ve had a real outpouring of support and anger from people who have observed that Jordan gets a terrific media image in the US,” he said.

Now that Jordan has refused to allow Tamimi’s extradition, he said, “the next step has to do with helping the Jordanians understand the disgrace they’ve brought upon themselves by the unconscionable approach to this. And that involves talking to Congress, which I’ve started to move on, and alerting American public opinion.”

“It’s clear to us there is no one to talk to on the Jordanian side. It’s all about carrots and sticks,” he said.

“What they have done now is enough to be the fly in the ointment. It spoils the image. We will find ways, with friends, to help people come to fuller understanding in the role that Jordan plays,” he said.

Because Tamimi is considered a hero in Jordan, Roth asserted, “no politician will take the risk of handing her off to the Americans. They will come up with any excuses they need.”

“In a country where the king changes the government as often I as change shirts, it’s hard to take seriously the claim that the constitution prevents this or that,” he added.

In 2003, Tamimi pleaded guilty in an Israeli court to multiple counts of murder and was sentenced to 16 terms of life in prison, but was released and returned to Jordan in 2011 as part of the deal to free IDF soldier Gilad Shalit, for whom Israel exchanged 1,027 prisoners.

In March, Tamimi was charged by the US with “conspiring to use a weapon of mass destruction against US nationals outside the US, resulting in death.” She was placed on the FBI’s Most Wanted list. 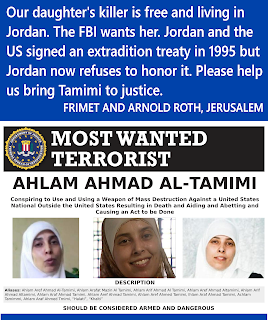 Roth, originally from Australia, and his wife Frimet Roth, who is from New York (and has blogged for The Times of Israel), have lived in Israel since 1988. After their daughter’s murder, they became active in seeking justice over the bombing and founded Keren Malki, or Malki Foundation, named for their daughter, which raises money for special-needs children.

Roth said he and Frimet are the only people who lost someone in the Sbarro bombing to pursue Tamimi, circulating a petition against the prisoner swap in 2011 and approaching the US Justice Department in the middle of 2012.

Roth also expressed “puzzlement” over the way the indictment of Tamimi has been handled by the US authorities.

“We’re puzzled, my wife and I, by the way in which the indictment was in the hands of the prosecutors for four years. We are wondering why the US is not being more forthright in putting the blame where it belongs, which is in the hands of the Jordanian authorities,” he said.

Hamas, the Gaza-based terror group that Tamimi was a member of, argued that the US has no right to extradite her because she was already freed by Israel in a prisoner exchange.

Roth challenged this argument, saying Tamimi was not absolved of her crime, but that her sentence, along with the other 1,026 prisoners released in the Shalit deal, was commuted, meaning that her sentenced was shortened “for pragmatic reasons.”

“But the commutations were made with conditions. In simple terms, it had to do with not going back to terrorism. And there is no question that Tamimi has breached those conditions,” said Roth.

Tamimi had hosted a weekly television show broadcast on Hamas’s satellite station, in which she continued to support terrorist attacks.

Roth speculated that Tamimi was tipped off about the US indictment by someone in the Jordanian government, and so she quit her show to make herself “less high-profile.”

“For the first time since our daughter was murdered, we are surrounded by people want to help,” said Roth.

---
Dov Lieber is The Times of Israel's Arab affairs correspondent. Eric Cortellessa contributed to this report.