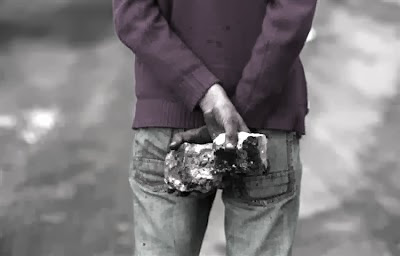 Some aspects of the bitter debate generated by the generations-long conflict between Arabs and Jews over the land our side calls its ancestral home is based on deep division over cultural, legal, philosophical and other weighty matters.

And some of it is based on foolish silliness, much of it unforgivably ignorant.

Over at the Elder of Ziyon blog, there's a post today that provides a clear-as-day exemplification of the second. We'll tell it our way since it also touches on some issues about which we have written here and which are on our minds a lot.

Bell's allegations and speculations would be serious if he had backed them with shreds of factual evidence or a modicum of logic. (Or even checked in with his friend Seidmann, which he likely he did notm just to validate before going public.)

But they're neither serious nor factual, and the logic they represent is the logic of demonizing Israel to achieve political advantage for your cause. Those "established patterns" of rock throwing by Jews exist in Bell's head, not elsewhere. (Yes, some rock-throwing is done by Jews, and is comprehensively dealt with by law enforcement agencies.) But rock-throwing by Palestinian Arabs? That's a hideous daily reality that exacts a heavy toll and the occasional successful conviction (for murder) of the rock-hurling, child-seeking cowards.

Besides, Bell's head-injured friend Seidemann makes clear in his first-person testimony that it was Arabs who sought him out (though he understands them).

Bell is likely to get more than the usual portion of vituperative criticism for his malicious column, along with claims that he acts more out of bias than anything academic or diplomatic. For us, though, the take-away message here is not how did this guy make the mistake (judgment, facts, something else) but how much harm is done daily by this kind of deadly combination of ignorance and arrogance.

It's an ugly thing to see the fruits of a mind-set that brings a person to make hateful allegations (and not for the first time), not only without evidence but against the evidence, driven by a zeal that seems almost religious in nature. When the person happens to be a seasoned diplomat who represented his country in one of the world's most politically-sensitive regions as well as an academic of some standing and a commentator whose views get wide media exposure, that's beyond baffling. It's incomprehensible, and so is the uncritical way the major Canadian paper picked it up and published it.

The same can be said of much of the factually-deficient commentary served up daily to people living far from here who swallow it whole without even realizing what is being done to them. Lethal journalism works that way.

I mentioned your blog in my JPost blog.

"Together we can change the world". Thank you.