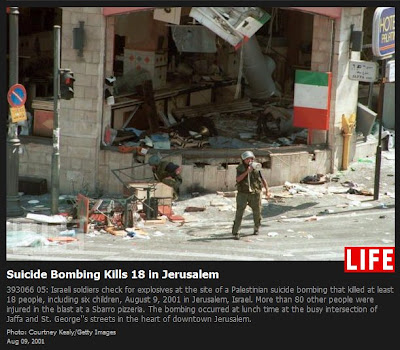 Earlier today, we sent a letter to the cabinet members of the government of Israel. The following is an English translation of what we wrote to them.

Like the rest of the Jewish nation, we yearn to see Israeli hostage Gilad Shalit back home with his long-suffering parents as soon as possible [and we have written about this in the past.]

But it is with indescribable pain that we read about the impending mass release of the convicted murderers of Israeli civilians and soldiers. Those of us who still personally feel the agony of the terror attacks of the last few years have failed to motivate our leaders to free Gilad Shilat via alternative means.

Among the prisoners to be released will be the convicted mass murderer Ahlam Tamimi. And among the victims whose sacrifices will be denigrated is our precious child, Malki.

Tamimi is unique in several ways. As such, she should be treated differently from other convicted murderers.

While she is a woman, and for this reason accorded relatively compassionate coverage by the media, Tamimi is a far more prolific murderer than most of the men she will accompany. She slaughtered seven men and women and eight babies and children in cold blood. Tamimi personally led the suicide-bomber, Al-Masri, right up to entrance of the target she herself selected, Jerusalem's Sbarro restaurant, made a hasty getaway to save her own skin, and then, in effect, "fired her weapon". Few of the prisoners on Hamas' demand list were so intimately involved in the terror attacks for which they were convicted and sentenced. Those who were, usually died in the attack.

Tamimi was sentenced to 16 consecutive life sentences, and has been in prison for five years. Few of the murderers Israel has agreed to release have spent so brief a period behind bars.

She has enjoyed the notoriously comfortable conditions that Israel lavishes on female Palestinian prisoners, including: the freedom to dress in clothes of her choice - she swapped her secular garb for Muslim fundamentalist scarf and robe; the opportunity to grant interviews to writers and to a documentary film-maker, thereby gaining widespread international media coverage and air-time for her hateful values; the unfettered opportunity to practice her religion to the fullest extent; the option of higher education - she was a university student and part-time journalist at the time of the murders; the time to socialize and politicize with her fellow terrorist-prisoners. Few male Palestinian murderers enjoy conditions as generous as Tamimi's.

Tamimi has declared unequivocally that she has no regrets about what she did. In one of her media interviews, permitted by the Israel Prison Service, she is quoted saying: “I am not sorry for what I did. I will get out of prison and I refuse to recognize Israel’s existence… Discussions will only take place after Israel recognizes that this is Islamic land”.

Several years ago, Tamimi spoke with Barbara Victor, author of  “Army of Roses: Inside the World of Palestinian Women Suicide Bombers” (London; Constable & Robinson, 2004). In her book, Victor writes that Tamimi “didn’t regret the deaths of all these children” and said “They should have returned to Poland, Russia or the United States, to the countries their parents came from”.

Of the other convicted terrorists to be freed, none – as far as we know – has made such egregious and documented statements of un-repentance.

Abdullah Barghouti, another mass murderer who prepared the bomb that slaughtered the Sbarro victims and who is also slated to be released in the Gilad Shalit exchange, publicized his lack of regret as well. But he qualified this by saying: "I do not accept responsibility for their deaths. I feel pain, of course. They are little children. But the government of Israel is solely responsible."

When, during the filming of a documentary, Tamimi was informed that the number of children she had murdered was higher than she had herself presumed, she smiled with pleasure into the camera.

The Sbarro bombing remains one of the most horrific acts of terrorism that Israel has ever known. It decimated an entire family, the Schijveschuurders; the father, mother and three of their young children died instantly, leaving behind four orphans. It robbed a couple of their only child, pregnant with her first baby when Tamimi murdered her. It sent a young mother into a coma from which she has never emerged; her ravaged life is never included in the tally of Tamimi's victims.

The evil that Tamimi embodies is special, and deserves treatment distinct from that of the other terrorists.

We recognize, as many observers have pointed out, that Israel has probably bungled the handling of Shalit's return. The damage has been done and there is no turning back the clock. We are resigned to the fact that releasing terrorists for Gilad Shalit's return means that Hamas will commit fresh kidnappings.

We also fear that Israeli soldiers, sent by their commanders to risk their lives in the pursuit of suspected terrorists, will now wonder whether they should die just so that another name is added to the next prisoner-release list.

Removing Tamimi's name from the list will enable Israel to demonstrate some vestige of strength, conviction and morality. This is a message which needs to be heard by its citizens,  its enemies and the world. Please support our efforts to bring this about.