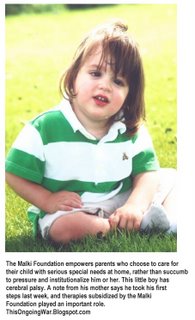 Several papers, including Brooklyn's The Jewish Press, have picked up a syndicated story originally published by Israel21C. We're taking the liberty of reprinting it here because Malki, whose legacy is described here, is our daughter. She was murdered five years ago.

On August 9, 2001, two days after Malki Chana Roth returned from summer camp for disabled children where she volunteered as a guide, the 15-year-old Jerusalem resident was murdered together with her best friend and 13 other Israelis in a terror attack on the city’s Sbarro restaurant.

Her grieving parents, who aspired to keep her memory alive for generations to come, turned her memory into a living vision called The Malki Foundation, which is benefiting thousands of Israelis of every persuasion.

“Malki always had a special place in her heart for weak and disabled children,” says Arnold Roth, Malki’s father. “Ever since she was 11 years old, Malki devoted hours of her time taking care of her disabled younger sister, Haya Elisheva. These special characteristics of hers stood at the base of our decision to establish a foundation dedicated to helping other parents of disabled children in her memory.”

Keren Malki (in English, the Malki Foundation), founded in 2001, aims to assist parents of disabled children who wish to raise their children at home rather than in an institution – and as a consequence face many hardships and various bureaucratic hurdles. Sadly the public health systems do not make life easy on these families and they are encouraged to place their children in a home where “all their needs will be taken care of.”

“My wife, Frimet, and I visited several such institutions following the public health systems’ recommendations. Our impression was equally bad and we even came to tears as we left one of these places,” said Roth.

“It was then when we decided to keep our child at home in spite of the great difficulties and the lack of financial support from the state. No parent wishes for his son or daughter to be born severely disabled, but once such a child is born the challenges faced by the family are enormous. Our intention is for Keren Malki to assist them right where the state fails to do so.”

In 2003 the Roths launched a partnership with Kesher, a well-established and respected Israeli social welfare organization with years of experience helping families of children with special needs.

“The Kesher team answers calls on Keren Malki’s behalf and advises them on what steps they should take in order to begin their process with us. Since my wife and I had our own share of struggles with the bureaucratic system, we can fully understand the anguish of the families. However, there is one condition: parents must first use the treatments their child is entitled under the law and only then approach us for additional assistance. We also advise them never to yield to the system’s negative approach toward them.”

One good example of assistance that is needed is when children living at home are deprived of therapies. Due to constant financial pressure on Israeli health funds supported by the state – which are responsible for these services – the authorities often seek ways to reduce their commitment. As a result, many disabled children are deprived of their right for essential paramedical care.

After a child reaches the age of three, the level of services he is entitled to drops dramatically and parents have no other choice but to pay for private therapists. Since very few families can sustain this expense on an ongoing basis, receiving financial help is crucial. Families can receive up to 80% of their expenses. The “Therapies in Home” program acknowledges any kind of therapy treatment, as long as the therapist providing the service is a licensed professional and the child resides in the family home.

An additional service includes providing various equipment, such as wheelchairs, standers and other items needed by a disabled child. In 2003, Keren Malki launched a joint venture with the renowned organization Yad Sarah, establishing its own well-equipped warehouse within the Yad Sarah headquarters building in Jerusalem for the benefit of the families.

Keren Malki’s policy is to offer its services to everyone who seeks it, no matter their religion. “There are more than 400 Arab families with disabled children who we helped. As a result of their custom to marry within the [extended] family, the percentage of disabled children in Arab villages is relatively high,” explains Roth.

Keren Malki has already empowered 1,300 families with disabled children. However, the Roth family itself was immensely strengthened by the mere fact of keeping their child’s memory alive. “Acting upon her death helped us feel less hopeless,” says Arnold Roth. Apparently, one of the great ways of helping yourself is reaching out your hand and helping others.

If you're accustomed to making donations to causes that do some good in the world, we can recommend the Malki Foundation highly. It has a total staff of one, the foundation's dedicated Executive Director. Almost everything else that the Malki Foundation does is done by volunteers. Its cost-effectiveness is outstanding, and it makes a huge difference to the lives of many hundreds of families: Christian, Moslem, Jewish and non-committal.

The Talmud says that the Holy One created mankind on the first day of the month Tishri, which we mark this coming Friday night. Thus Rosh Hashanah commemorates the creation of the human race. It is a time for cleansing and renewal, a chance to receive forgiveness and clear the slate. And a fine time to make a charitable donation.

To our Jewish readers, a reminder that giving charity in the Rosh Hashana New Year period that is upon us now is one of the three traditional ways - along with repentance and prayer (Teshuva, Tefillah, Tzedakah) - of preparing for the coming year.

Donations to the Malki Foundation are tax-deductible in many cases, and can be made on-line via a secure donations page. Please check here to see how this works.