17-Jul-17: Two images: Do the things that offend people say something about them?

The first represents a cause around which large swathes of Palestinian Arabs and citizens of the Hashemite Kingdom of Jordan, including most of the members of its parliament, have rallied.

Are those Arab populations offended? They certainly are. 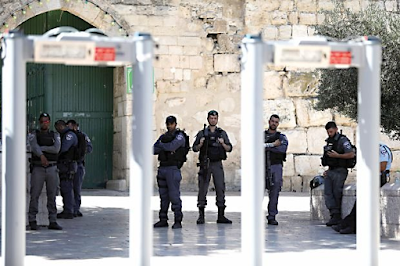 The photo shows new enhanced security devices that were installed on the approaches to the Temple Mount in Jerusalem following Friday's lethal shooting attack by three Arab gunmen from the northern Israeli city of Um Al-Fahm.

They attackers managed to kill two Israeli Border Guard security men, both of them from Israel's Druze minority, who were protecting the Moslem holy sites. Scanning and detecting devices just like these have been used to screen every visitor to the nearby Kotel for years. Those visitors are not all Jews, but it's a site holy to the Jews and Jews are a very large of the crowds that throng the Kotel plaza.

Muslims heading for the Temple Mount have had the privilege of being exempt from security measures like these till now. This change evidently offends them deeply even as it will almost certainly enhance their safety and ours. 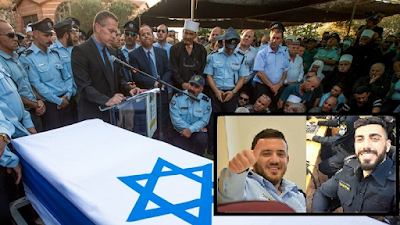 The second shows the funeral of the two victims of that shooting attack.

Haiel Sitawe, 30, from Maghar, a mostly Druze and Arab city in northern Israel, who signed up with the Border Police as part of his mandatory national service in 2012 and served in the unit responsible for securing the Temple Mount ever since; and Kamil Shnaan, 22, from Hurfeish, an almost entirely-Druze village also in Israel's north. Sitawe is survived by a wife, Irin, and a three-week-old son, as well as parents and three brothers. Shnaan was to celebrate his engagement party to his girlfriend in a week. He leaves behind parents, a brother and three sisters.

The deaths by shooting of the two men whose self-endangering presence was meant to protect the Al-Aqsa precinct and its worshipers from terrorist attack has aroused no expressions of their honor offended - not from Jordan (see our post from yesterday: "16-Jul-17: The Friday killings: Jordan condemns but pay attention whom") and not in any meaningful way from the Palestinian Arabs.

It's almost as if they want attacks like this to happen.