07-Nov-14: At the BBC, a road 'accident' in the far-off Middle East gets curiously prominent coverage

The rising wave of chaos and violence that have brought Jerusalem into the headlines in the past months exacted another life last night with the death of a second victim of a terror-attack-by-car assault on pedestrians on a road that skirts the edge of the Old City.

It is reported this morning (Friday) that Shalom Ba'adani, a boy of seventeen, succumbed at Hadassah Ein Karem hospital to the critical injuries he suffered when a resident of Shuafat, northern Jerusalem, Ibrahim al-Akari, steered his commercial van directly into a crowd of people standing at a Jerusalem Light Rail stop on Wednesday.

Not the first murder-by-driver to terrorize Jerusalem in recent days (we wrote here about another:
("27-Oct-14: Another quiet, decent life whose tragic end fails to merit news reporting"), this time there appears to be a little less pretense on the part of the family and friends of the killer about the motivations:

In a conversation with Ynet, the terrorist's 16-year-old son, Hamza, said he looked up to his father's acts. "I'm proud of my father. I'm not sad that he died a martyr." The police agreed for the family to bury al-Akari at midnight in the presence of up to 35 people... The terrorist's brother is Musa al-Akari, a prisoner released in the Shalit deal and deported to Turkey. He was a member of the Hamas cell that murdered border police officer Nissim Toledano in 1992. Al-Akari, 38, a father of five from the Shuafat refugee camp, arrived at the Light Rail station in the afternoon and ran over anyone who crossed his path. He was shot to death by a border police team that was on site after he exited the vehicle and attempted to attack passersby. Hamas has taken responsibility for the attack. [Ynet. November 5, 2014]

What Ynet does not mention is that the killer leaped from his van after mowing down his first victims and, armed with a lethal metal bar, launched a frenzied slashing attack on passers-by. He was stopped by a volley of gunfire from security forces patrolling the area and died. The terror attack was captured on security-cam video, and there is wide media coverage of the riots that ensued in Arab suburbs of Jerusalem in the hours that followed and again this morning (Hebrew report). 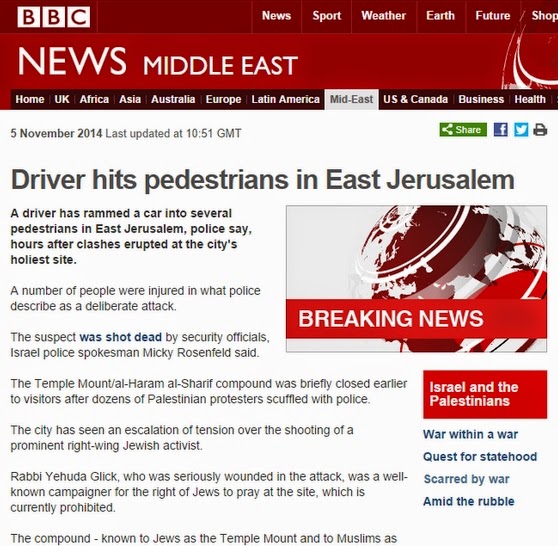 The first of Al-Akari's victims was a Border Police superintendent, Captain Jadan Assad, whose funeral in the Druze community of Beit Ja'an, also received wide media coverage - at least in Israel - yesterday (Thursday).

Another victim of the terrorist's evil was - again, not for the first time - the common sense of some of the people who report events in the news industry. Here (on the right) is a screenshot of the initial report as published on the BBC's website in the hours after the Jerusalem attack" "Drive hits pedestrians..." Could happen anywhere, right? And if we, the BBC, want to avoid being judgmental, well, that's understandable, no?

Even in the revised and "improved" version of the BBC's account ["Jerusalem: Palestinian van attack kills policeman", November 6, 2014 - including graphic video footage that leaves little doubt about where raging jihad fits into this tragic event], there is a striking aspect worth noting:


A Palestinian driver has rammed a van into several pedestrians in Jerusalem, killing a policeman, hours after clashes at the city's holiest site. Some 13 people were hurt in the attack on Wednesday. The driver was shot dead. Hamas militants said they carried out the attack. Israel's prime minister said it was a result of "incitement" by the Palestinian Authority and Hamas. A similar car attack by a Palestinian took place in the same area two weeks ago which left a woman and a baby dead... His Facebook page states that he is a member of Hamas, and the Twitter account for the group's armed wing, the al-Qassam Brigades, described him as a member and a martyr... Hamas rejects Israel's right to exist and advocates what it calls "armed resistance" against the Jewish state... Hamas praised the attack as a "glorious operation", describing Mr Akari as a "hero" whose actions were a "natural response" to Israel's actions in east Jerusalem. Two weeks ago a Palestinian from the Abu Tor area drove his car into a tram station, killing a baby and an Ecuadorean woman.

What's striking here, apart from the circumlocutions? The word terror appears in this lengthy article exactly zero times, reflecting the morally-compromised and self-damaging guidelines at work within one of the world's most influential sources of news and opinion [here's one of our earlier notes about the phenomenon]. The BBC at its best.