14-Mar-19: Two years after Federal charges are unsealed, Ahlam Tamimi remains free. How is this happening? 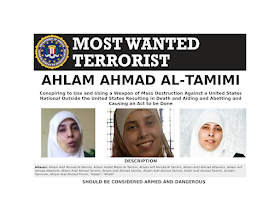 Two years ago today, on March 14, 2017, the United States Department of Justice made an official announcement about the legal status of the woman who for years has boasted of bombing Jerusalem's Sbarro pizzeria and everyone in it.

Fifteen people were killed there that hot summer afternoon in 2001. One was our daughter, Malki. A sixteenth victim has been alive but unconscious all these years. Many more people were left maimed with injuries of a hideous nature. Tragedy layered upon tragedy and more tragedy.

We - Frimet and Arnold Roth who write this blog - campaigned for years for terrorism and murder charges to be brought against Ahlam Tamimi after her freedom was extorted by Hamas in the catastrophic Shalit Deal. We wrote, spoke, cajoled, lobbied, and with help from some very fine people even took it to the US Congress ["08-Feb-16: Terror is now a legitimate career option in Pal Arab society but its enablers barely notice" - text and video]

And then, with almost no advance notice, serious terrorism charges against her were suddenly unveiled two years ago to the day. The official text of that March 14, 2017 announcement is online here.

Tamimi, a woman of 21 at the time she admits she carried out the massacre, is Hamas’ first female terror operative. Today she is 39, married to another convicted and unrepentant murderer. She's a mother, a Jordanian celebrity, a prominent propagandist for Islamism and jihadist ultra-violence, and a disgracefully well-paid beneficiary of the Palestinian Authority's notorious Pay-to-Slay program.

In Jordan, she does not live in hiding. As far as we know, she never has, not even for a single day. This is relevant to the role of US diplomacy as we explain.

Tamimi's home address there is well enough known that she is frequently interviewed by the media. Not only by the Jordanian media or the Arabic media but by global news agencies like Associated Press that have sent reporters to her home to interview her on video.

The disturbing but unpublicized reality is that anyone who seriously intended to take her into custody would have no difficulty locating her.

Ahlam Tamimi has boasted publicly, repeatedly and for the record that she took the central role as the planner and executor - the mastermind - of the Sbarro pizzeria massacre. She has claimed obscene credit - while smiling broadly - for the fact that so many of those killed were children. She has made clear that this was her intention in choosing the target site and the attack time.

As monsters go, it's hard to imagine one as calculating and unapologetic as Ahlam Tamimi.

All three of the DOJ officials quoted in the 2017 announcement have moved on to other positions during these past two years. We wrote a letter last week, addressed to them and to the three officials who filled their places in the DOJ. Among other things, we asked them whether the DOJ is going to address certain serious problems that we described for them.

At  this stage, we do not plan to publish the letter; we continue to hope that we will get a meaningful DOJ response that deals with the important issues we raised. However we do want people to know (which is why we are posting this now to our blog) that we sent that letter and that it respectfully requests the DOJ to take specific steps.

To set the stage, that March 14, 2017 DOJ announcement starts with a statement of the basic facts:


A criminal complaint was unsealed today charging Ahlam Aref Ahmad Al-Tamimi, also known as “Khalti” and “Halati,” a Jordanian national in her mid-30s, with conspiring to use a weapon of mass destruction against U.S. nationals outside the U.S., resulting in death. The charge is related to the defendant’s participation in an Aug. 9, 2001, suicide bomb attack at a pizza restaurant in Jerusalem that killed 15 people, including two U.S. nationals. Four other U.S. nationals were among the approximately 122 others injured in the attack. Also unsealed today was a warrant for Al-Tamimi’s arrest and an affidavit in support of the criminal complaint and arrest warrant. The criminal charge had been under seal since July 15, 2013... Two Americans were killed and four injured.

It goes on to describe Tamimi bluntly but perfectly accurately as


an unrepentant terrorist who admitted to her role in a deadly terrorist bombing that injured and killed numerous innocent victims.


“The charges unsealed today serve as a reminder that when terrorists target Americans anywhere in the world, we will never forget – and we will continue to seek to ensure that they are held accountable,” said Acting Assistant Attorney General McCord. “I want to thank the many dedicated agents and prosecutors who have worked on this investigation…” “We have never forgotten the American and non-American victims of this awful terrorist attack,” said U.S. Attorney Phillips. “We will continue to remain vigilant until Ahlam Aref Ahmad Al-Tamimi is brought to justice. “Al-Tamimi is a terrorist who participated in an attack that killed United States citizens,” said Assistant Director in Charge Vale. “The bombing that she planned and assisted in carrying out on innocent people, including children, furthered the mission of a designated terrorist organization. The FBI continues to work with our international partners to combat terrorists like Al-Tamimi and hold them accountable.”

Two full years, as we said, have passed since the unsealing of the charges against Tamimi. Today is the anniversary. Despite the charges and despite the strong words of US justice officials, she remains at large and a potent voice for more Islamist terror.

Paraphrasing, our letter lists some of what has happened in these past two years. (Some important points in our letter are not included here - we may disclose them at some future time.):
There are multiple disturbing ways in which Jordan's opposition to the Tamimi extradition is being represented partially and not entirely accurately to the American public and to law-makers. 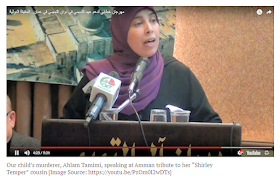 Here's an example. US law, since 2004, has required the Secretary of State to provide Congress by April 30 of each year with “a full and complete report on terrorism with regard to those countries and groups meeting criteria set forth in the legislation”. This annual report is entitled Country Reports on Terrorism. As in previous years, the 2018 edition says: “Jordan remained a committed partner on counter-terrorism and countering violent extremism in 2017…”

Then, for the first time ever, it goes on to very briefly address the Tamimi extradition:


A U.S. criminal complaint was unsealed in March charging Ahlam Aref Ahmad Al-Tamimi, a Jordanian national in her mid-30s, with conspiring to use a weapon of mass destruction against U.S. nationals outside the United States resulting in death. The charge is related to her participation in an August 9, 2001, suicide bomb attack at a restaurant in Jerusalem that killed 15 people, including two U.S. nationals. Four other U.S. nationals were among the approximately 122 others injured in the attack. Also unsealed was a warrant for Al-Tamimi’s arrest and an affidavit in support of the criminal complaint and arrest warrant. Jordan’s courts have ruled that their constitution forbids the extradition of Jordanian nationals.

That last sentence is astounding; it's also quite revealing. Why does this important State Department report to Congress not go on to explain, which is certainly the case, that while Jordan says it's invalid, the United States of America says the exact opposite and clearly means it. The US says the 1995 Jordan/US Extradition Treaty is fully in effect and always has been since it was signed into effect. Isn't that worth noting in a report to Congress? Shouldn't the diplomats and officials of the US State Department at least say the US does not agree with Jordan? And that the US believes Jordan is wrong?

It's an exceedingly strange matter on which to remain silent.

Tamimi has become an iconic figure, a person of huge influence in a region where terrorism is a daily and manifest threat to public stability. She lives a life to which no one with a violent history of savagery like hers should ever be entitled.

While we believe in the importance of a peace-oriented strategic relationship with Jordan and its ruler, we also believe in the central and pre-eminent role of justice. We continue to hope we will still see it in the case of our child’s killer.
Share

Like many sites that advocate for a moderate, Israel-friendly viewpoint, we unfortunately receive abusive, offensive and racist messages on a routine basis. We want it to be clear that we reserve the right to reject them in our absolute discretion. Racist and Israel-hating sites abound on the web. So not being allowed to play in our sandbox can hardly be called a hardship. Anonymous postings or messages where email address of the poster is hidden from us will generally not be accepted.