8-Aug-12: Malki, your death will not remain demeaned

Frimet Roth has an op-ed in tomorrow's paper edition of the Jerusalem Post. A version of it is posted on the JPost.com online edition now; the one cross posted here includes hyperlinks to sources.

As the grief deepens 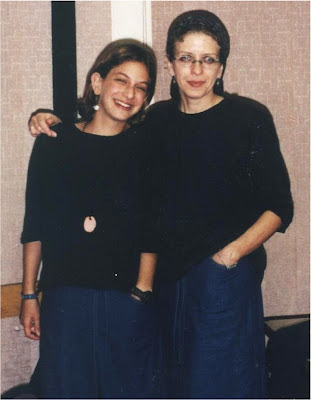 
Malki, my angel, know we will never cease fighting for justice. Your death will not remain demeaned.


Eleven years ago today, Israel was rocked by one of the worst terror attacks it has known. The suicide bombing of Jerusalem’s Sbarro restaurant left fifteen men, women and children dead – the equivalent of 643 Americans or 121 Britons.

Memories of that horrific day are chillingly vivid for my family: our teenage daughter and sister, Malki, was among the fifteen who perished in the inferno produced by the 10 kilograms of explosives concealed in the terrorist’s guitar case.

On the heels of that grief, we have suffered an unprecedented travesty of justice perpetrated by our own leaders. Malki’s murderer, Ahlam Tamimi, was one of 1,027 Palestinian terrorists released in the Shalit deal of October 2011. Alongside our untold personal pain, that move shook the foundations of Israel’s justice system and, perhaps most disturbing, has endangered all Israelis.

Uncontroverted evidence has emerged of the consequences of that fateful move. Starting the day after Gilad Shalit returned to Israeli soil, a succession of journalists, IDF officers and Netanyahu confidantes have publicized damning information hidden from the public throughout Shalit’s captivity.

First we learned that, contrary to our prime minister’s insistence, the release of murderers was not the only way to rescue Shalit. Intelligence and military options existed for locating and saving him but were never pursued. [See "Why Did Netanyahu Free My Daughter's Killer? Mother Blasts Prisoner Exchange To Free Gilad Shalit", published in FORWARD December 09, 2011 [source]

In July 2012, David Meidan, who served for many months as Netanyahu’s envoy to the Shalit negotiations, delivered a lecture at Tel Aviv University. Contradicting Netanyahu’s strident assertions, Meidan disclosed [source] that politics, and not only security and diplomacy, were a factor in the prime minister’s decision to sign the deal. According to Haaretz [source], Netanyahu also recently conceded to the German newspaper Bild that his decision to sign the deal was in part due to pressure from his wife, Sara.

The ramifications of Netanyahu’s selfish gambit have proven dire.

Six months after the deal, the IDF website [source] posted the following: “Several of the terrorists recently released from captivity as part of the deal… have returned to terrorist activity… with ten terrorists arrested so far.”

This was a consequence of the deal against which we and other terror victims warned. Tamimi had declared “I do not regret what happened. Absolutely not… Do you want me to denounce what I did? That's out of the question. I would do it again today, and in the same manner.” [source]

Last month, Army Radio interviewed Col. Saar Tzur, the outgoing commander of the Binyamin division. Tzur said that the Shalit deal triggered a steady and noticeable rise in the number of attempted terror attacks in Judea and Samaria and inside the Green Line [source]. "It doesn't matter whether they were released to Gaza, the West Bank or abroad,” Tzur said. “We see a return to terrorism.”

This last point is particularly telling in light of an assertion by Netanyahu’s spokesman Mark Regev in June [source]: “Israel does not have a problem with terrorists leaving,” said Regev. “It’s easier for us when hardcore terrorists actually leave. Their ability to hurt us in the future is much more limited.”  Apparently, Netanyahu presumes to know better than the IDF.

Regev was responding to a reporter’s question about the government’s decision to permit a convicted murderer, Nazir al-Tamimi, to cross from the West Bank into Jordan. According to the conditions of his release in the Shalit swap, al-Tamimi was to be confined to the West Bank for life. Yet in June 2012, Netanyahu agreed to ignore that restriction thereby enabling him to marry his fiancée. She happens to be Ahlam Tamimi.

Granting marital bliss to two such evil souls is probably the most infuriating of Netanyahu’s confounding actions.

As the parents of a child who died in Israel’s ongoing war with its bellicose neighbors, we have enjoyed not one iota of consideration from the man who now holds our lives in his hands. Netanyahu has ignored each of several impassioned pleas by us to keep Malki’s murderer behind bars. He has never explained or justified to us his decision to consent to the mass release of convicted murderers.

Today, on the anniversary of their deaths, some Israelis will visit the graves of Tamimi’s victims: Mordechai and Tzira Schijveschuurder and three of their eight children; Shoshana Greenbaum and her unborn baby, the only child of Shifra and Dr. Alan Hayman; Michal Raziel and Malki Roth, best friends buried side by side; and the seven other men, women and children whose deaths caused Tamimi to smile joyously on video [video].

We can be certain that one Israeli will not honor these precious souls today - our prime minister. He has made it clear that people without political currency simply do not merit his attention.

He and his cohorts could learn a lesson from Malki. In the final year of her life, she kept a lengthy daily journal [source] of her thoughts and activities. She was a smiling, active, vibrant and talented girl but she carefully recorded the details of each Israeli terror victim on the day he or she died. They mattered to her. On May 29, 2001 for example, three Israelis were shot dead by terrorists. Malki wrote: “In homeroom class, I couldn’t concentrate at all and it was very difficult for me. Everything that is happening with this “situation” has thrown me into a tough depression and I was terribly sad.”

If only our leaders felt even a fraction of Malki’s love for their fellow Israelis. This nation deserves that.

Hi, Shalom,
I receive your "thisongoingwar" every day and I want to congratulate you for as this is one of the very few ways to obtain such accurate information regarding the daily attacks on Israel and Am Israel!
Concerning your sweet and beautiful daughter Malki I cannot find words to express my pain and anger even if a perfect stranger! I am horrified to realize what the Netanyahu government dared to do after all these repeated murders of Jews: releasing such monsters as Tamimi and Nazir (cancel the R and you obtain NAZI) alTamimi is totally inacceptable for a Jewish state. Letting them to enjoy life is not acceptable when so many Jews suffer from having lost their loved ones. There must be a curse on these Jewish (really Jewish?) leaders. I mean it. We Jews cannot accept this situation where murderers can freely move around and repeat their crimes. I admire your reactions and actions in favor of terror victims. HaShem bless you for ever. Excuse my English.